As early as 1992, Oldsmobile, the AAA, and technology from electronics manufacturers Hughes and EDS were making in-dash turn by turn GPS navigation a reality.

At the time, GPS positioning for civilian use was purposefully still significantly less accurate than military applications. This would later prompt President Clinton to sign a policy directive in 1996 that declared GPS a dual-use system. It wasn't until the year 2000, when selective availability of GPS came to an end, giving civilians the same level of accuracy as military users.

With this in mind, lets take a trip down the road to in-dash vehicle GPS! The AAA, Federal Highway Administration, Florida Highway Department, Avis (rental car company) and Oldsmobile combined resources to establish TravTek. In early 1992, they began a one-year test in Florida to determine the possibility of using a new in car navigation system, throughout the U.S.

The TravTek system displayed a clear and simple visual map on a 6-inch touch screen integrated into the Oldsmobile Toronado's dash. A magenta line on the map lead from where you were to where you were going. A white arrow represented your car. As you moved, the arrow travelled the magenta path to your destination, pinpointed by a white star. 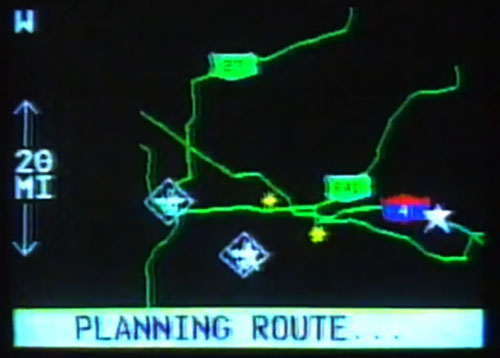 The map showed the route to take, the miles to the destination and the time it will take to get there. 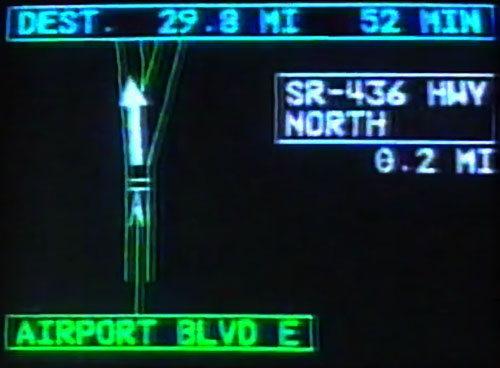 Readings were given on the screen as to how many miles to arrival and how many tenths of a mile before you needed to make a right or left turn to get there. A voice synthesizer warned you of turns coming up to keep you on course.

At the center of the system, was an on-board computer containing Orlando tourist info and map data covering all roads in a 1,200-square-mile area in five central Florida counties. 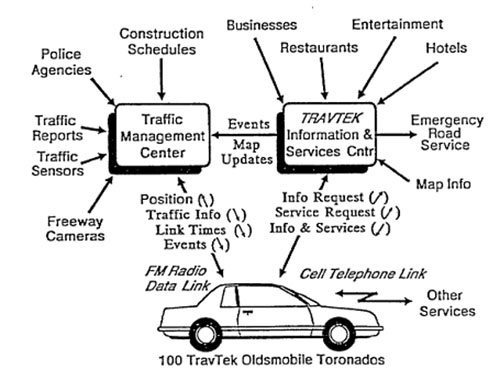 Data from traffic signals, highway surveillance cameras along the roads, emergency vehicles, construction reports and other TravTek cars were fed into the computer continuously from a AAA traffic management center in Orlando. Traffic information and rerouting, did not become widely available on modern vehicles until the development of XM Nav Traffic, an RDS-based terrestrial system, in 2004.

Vehicle location was pinpointed using a built-in magnetic compass, sensors in the car`s wheels that measured distance traveled and a satellite that feed its signal to a large antenna on the rear deck lid.

The system was loaded with information. Press the button for hotel listings, and the data appears including the hotel's address, phone number, number of rooms, rates, smoking or no-smoking room availability, number of pools and restaurants and availability of a game room or tennis courts. Touch a box on the screen with a symbol of a phone and the TravTek computer calls the hotel to make your reservation.

The leading feature of the TravTek system was "Things to See and Do" subcategory under Services/Attractions. The user could browse by month. Touch "July" for example, and every concert, comedy act or stage play taking place in the vicinity then, including times, dates, location and ticket prices, is shown. 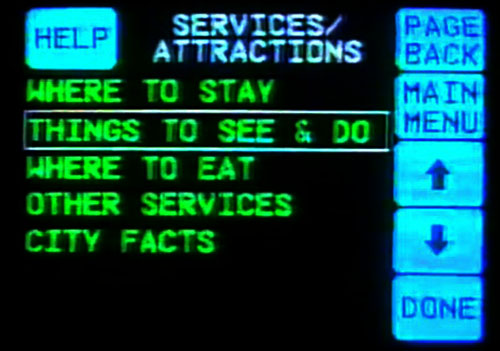 The system also pinpointed accidents (red star at the location), closed roads (red circles) or bumper-to-bumper congestion (yellow circles). If a red star or yellow circles appeared on screen, you need only press a button on the steering wheel hub to direct the computer to come up with an alternate route.

If you got lost, veered from the map routing, the voice warned "you`ve left the course". At this point you could touch the "help" box on the screen and a telephone, standard in each TravTek car, would dial the AAA traffic management center in Orlando where staff would answers any questions to help get you back on your way.

The fleet of 100 TravTek Oldsmobiles were made available for AAA members through Avis rentals in Orlando for $139/week or $29/day (1992 dollars), with unlimited mileage. Maps were limited to five Florida counties, expected to be used primarily by tourists whose usage habits were recorded for development purposes.

Oldsmobile went on to develop Guidestar, utilizing GM's investment into Hughes and EDS. Guidestar was a hard disk-based system available exclusively in the Olds Eighty-Eight, later also the LSS and Bravada for $2000 ($300-400 more for each map cartridge). The system offered satellite navigation for 17 states but lacked live traffic updates. 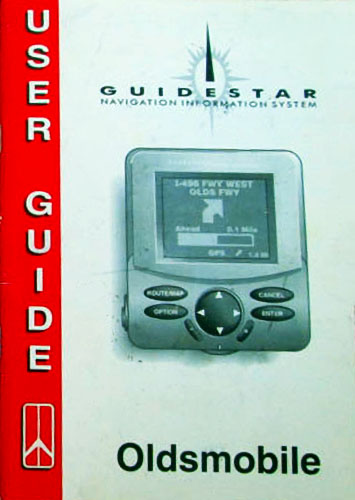 Since the 1992 Oldsmobile Toronado (with its built in touch screen) was discontinued, the Guidestar system was moved to a post that could be mounted to the center console rather than directly a part of the dashboard. Although we did see the 1994 Aurora show car with an integrated version of the system, screen on dash, and navigation buttons mounted to a flip out section attached to the center console. The bracket that it was mounted on was adjustable and the main unit was removable to prevent theft. The main unit was removable, but the entire Guidestar unit included an on-board computer which was located in the trunk. The computer monitored four types of information: signals from the antenna, vehicle road speed, direction of travel and signals from an internal gyroscope. This advanced dead reckoning technique along with GPS inputs was needed as GPS at the time was not accurate enough (it was reported to be accurate to within 100ft at that time).

In 1995, Guidestar became the first on-board navigation system to be offered on a US production car. The Guidestar system (as of 1996) was available in 17 states and the District of Columbia. The states were California, Connecticut, Delaware, Florida, Georgia, Illinois, Indiana, Maryland, Maine, Massachusetts, Michigan, New Hampshire, New Jersey, New York, Rhode Island, Vermont and Virginia.

Avis reported that the cars with Guidestar were always rented out, and that it cost $5 a day for Guidestar.

Video above shows the earlier TravTek GPS System in action on a 1992 Toronado. 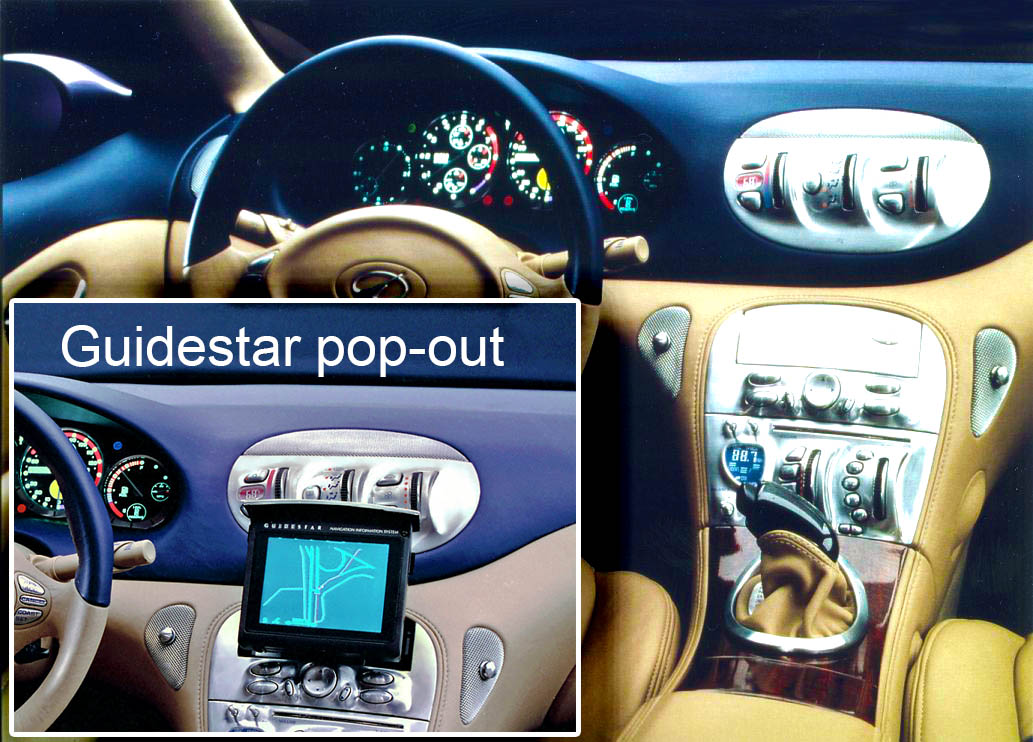 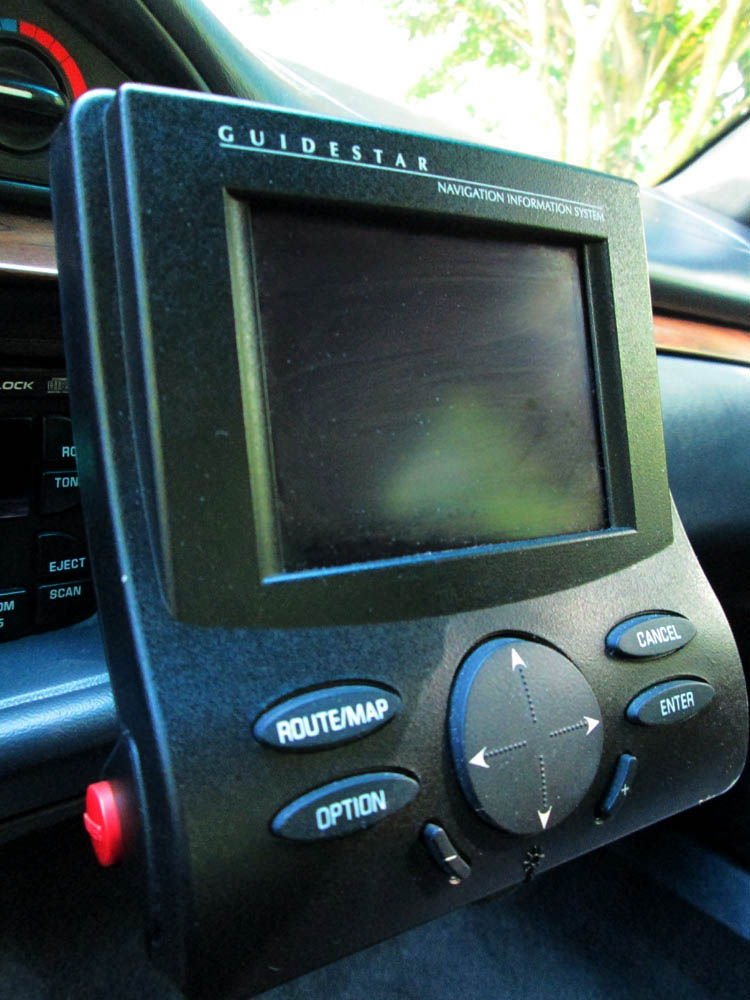