HomeOlds Catalog1897-1899
Innovations
1893 - Olds ships his four wheeled flash-boiler based vehicle to Bombay, India. Marking the first sale of a Michigan-made vehicle and likely the first U.S. export of a vehicle.
1895 - R.E.Olds applies for (in 1895) and receives (in 1896) a patent for a "Gas or Vapor Engine".
See also - Patent for "Combined Gas and Steam Engine".
1897 - Olds publicly offers for sale his first gas powered vehicle. Olds Motor Vehicle Company is formed August 21, 1897 (sold this company in 1899, and renamed Olds Motor Works).
< Prev 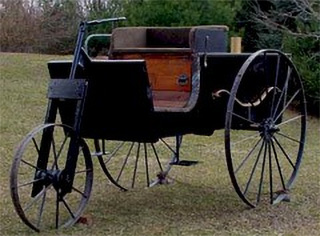 1887
R.E.Olds builds his first horseless carriage. It is a three wheeled steam powered vehicle.
(At the time, steam and electric powered carriages were more common than combustion engines, which were more complex and harder to control).

1892
Ransom's (seen at the steering lever) 2nd attempt at a horseless carriage. The vehicle had a flash boiler and four wheels. Its engine had an estimated 4 HP for a top speed of 15 MPH. The vehicle was highlighted in an 1892 issue of Scientific American. It was sold a year later for $400, and shipped to Bombay, India but never delivered, because the ship sank en route. 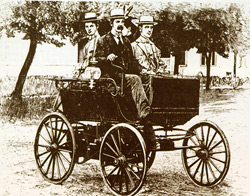 1896
R.E.Olds receives a patent for a 'vapor' (gasoline) engine. The engine was installed in this vehicle, which was a four-wheeler with rubber tires and tiller steering and carriage body supplied by Clark and Son of Lansing. Completed in the summer of 1896, the car, with its water-cooled 5HP engine and a top speed of 18 MPH, was demonstrated for the local newspaper on Aug. 11, 1896, two months after Henry Ford's Quadricycle in Dearborn.