On this page:
Aurora Year to Year Changes

When Chuck Jordan returned from General Motors’ European offices to become the automaker’s vice president of design in the late 1980s, he realized that “all the sedans on the road were dull, drab and boring. There was no character, no excitement.”

Secretly, Jordan set one of GM’s advanced design studios to work on a sedan that had character and excitement. The car was designed and a full-scale model was created. Jordan parked a full-scale model of the car in the hallway at GM’s headquarters, placing it so executives couldn’t avoid it as they walked past the car several times every day.

At last, the day arrived when the head of Oldsmobile asked if he could have the design for his division, as its new flagship sedan.

The logic behind such a bold marketing move was: First, Oldsmobile hoped to target a new demographic of buyer, one that previously would not have considered Oldsmobile. And second, it also looked to rivals for branding inspiration; Acura, for example, was built by Honda but sold as a premium brand through a separate dealer network, with few identifying links to its parent company.

While the Aurora was sold through Oldsmobile dealers, the brand still wanted to distinguish it as a premium model that broke the perceived Oldsmobile mold. The Aurora’s aerodynamic styling produced a drag coefficient of just 0.32, and set the design benchmark for Oldsmobile’s later models, such as the Alero and the Intrigue. While the Aurora’s primary mission was to attract luxury import buyers, its secondary mission was to draw younger buyers of all incomes into Oldsmobile dealerships. Those who could not afford an Aurora (or didn’t want a full-size sedan) could still drive away in a similarly  styled Intrigue or Alero.

General Motors held little back during the Aurora’s development. It’s 4.0-liter V-8 engine, for example, was derived from Cadillac’s premium 4.6-liter Northstar V-8, which had been exclusively reserved for Cadillac models prior to the Aurora’s development. Output of the Aurora’s dual-overhead camshaft, 32-valve V-8 was rated at 250 horsepower, or better than one hp per cubic inch, and the engine was mated to a four-speed automatic transmission that featured both a “normal” and a “performance” shift mode. In performance mode, the Aurora was
capable of an eight-second sprint from 0-60 MPH, yet still delivered fuel economy of 26 MPG highway and 17 MPG city.

In its initial Aurora brochure, Oldsmobile noted that the same 4.0-liter V-8 engine used in the Aurora had broken a 25,000-kilometer (15,500-mile) speed and endurance record previously held by Mercedes. At a time when many buyers still questioned the quality of American cars, Oldsmobile also pointed out that the Aurora’s first tuneup wasn’t needed until 100,000 miles, and that the car could be driven without any coolant (at reduced speeds) as far as 50 miles, thanks to sensors that would alternately shut down four of the car’s eight cylinders to reduce engine temperatures. As further evidence of the Aurora V-8's durability, Oldsmobile touted the fact that the engine contained 556 fewer parts than Lexus’s 4.0-liter V-8, yet it delivered the same 250hp and 260-lbs.ft. of torque.

A rigid and strong chassis structure was a design goal from both a ride quality and a safety perspective, and the Aurora’s engineers exceeded the car’s targets to the point that GM’s existing test equipment proved insufficient to crush the Aurora’s body. A 1997 Aurora brochure stated that, “The roof structure withstood more than 8,000 pounds of force in a crush-resistance test – far exceeding the Federal Motor Vehicle Safety Standard for passenger cars – before the test equipment simply gave out.”

In its debut year of 1995, Oldsmobile managed to sell nearly 46,000 Aurora sedans, but the car’s ambitious base price of $34,360 hampered second-year sales. While considerably less than the $43,500 commanded by a Mercedes-Benz E320 (a reported development benchmark for the Aurora), it was still a stretch from the Acura TL’s $29,950 base price. In the final year of the Aurora’s first generation, 1999, Oldsmobile would sell less than 19,000 units.

The second generation of the Aurora, which debuted in February 2000 for the 2001 model year, was originally supposed to take Oldsmobile even further to the luxury side of the scale (creating more room for additional models within the brand), but economic realities caused GM to downsize its total product offerings. While the second-generation Aurora still retained the 4.0-liter V-8 atop the range, it also debuted a 3.5-liter V-6 variant of the engine (for 2001 and 2002 only), good for an output of 215 horsepower.

The lower-priced Aurora may have helped boost Oldsmobile’s falling sales, but 10 months after the second-generation Aurora’s debut (and seven months after its second appearance as an Indianapolis 500 pace car), General Motors announced plans to shutter its oldest division in the coming years. Perhaps equally damaging, the 2nd generation Aurora never managed to feel as “special” as its predecessor, perhaps due to styling that was no longer innovative, but prevalent throughout the Oldsmobile lineup.

1995 Oldsmobile Aurora:
Oldsmobiles all new flagship model was launched in the spring of '94. It was built on the all new G-Body luxury front-wheel drive platform along with the Buick Riviera. Only one well equipped trim level was offered. Power came from an exclusive 4.0 V8 derived from the highly praised Cadillac Northstar. Aurora marked a new direction for Oldsmobile in terms of styling and marketing. It become the styling insperation for all Oldsmobile vehicles for the rest of the decade. It also marked the change towards attracting more affluent import-oriented buyers to the division.

1996 Oldsmobile Aurora:
Oldsmobile made some minor revisions to the Aurora including new rear glass which had less distortion than previous models. Further revisions included daytime running lights and OBD II compliant On-Board Diagnostic. Tweaking the climate control and safety alarm, a revised keyless entry system with new features was added. A 12 disc BOSE CD changer was made optional, and the short list of optional equipment was expanded to include Chrome wheels and a gold trim package. The 96-99 models had the passenger temperature toggle button on the middle right portion of the instrument panel replaced with an air recirculator button.

1997 Oldsmobile Aurora:
A new in-dash CD player for the BOSE sound system highlighted the improvements. Another new feature was a tilt-down right-outside mirror that enhances the driver's view of close objects, whenever the shifter is placed in reverse. The underside of the door handles have been slightly recontoured to minimize slipping fingers when the handles are pulled. Seat belt release buttons were moved from the face of the buckle to the end for improved convenience. An electronic compass was added to the inside rear-view mirror. Larger front brakes came along with cast aluminum front control arms and steering knuckles. The rear ashtray assembly was changed from a click-lock face to a pull-up face. Finally, the spare tire cover and jack cradle assembly was changed from the jack and cover being bolted down to one where the jack sat in a plastic "bucket" inside the spare with the cover simply placed on top. On some 1997's a modest Olds badge returns to the right-rear corner of the car along with the Aurora name.

2001 Oldsmobile Aurora:
Aurora was all new and went on sale in early 2000. The new car was smaller on the outside with less agressive styling. Interior space actually increased, though trunk space dipped slightly. The interior featured real wood trim and a new gated shifter. A V6 became the standard engine for the first time. Aurora was now Oldsmobile's only full size car. There was a new V6 version along with a lower price to cover some of the market lost by the Eighty-Eight and LSS.

2003 Oldsmobile Aurora:
The V6 has been dropped in the final year of production making the Aurora one of the few V8-only sedans on the market. Two new exterior colors, Bordeaux Red and Steel Blue, have also been added for the Aurora's going-away party.
< Prev Next > 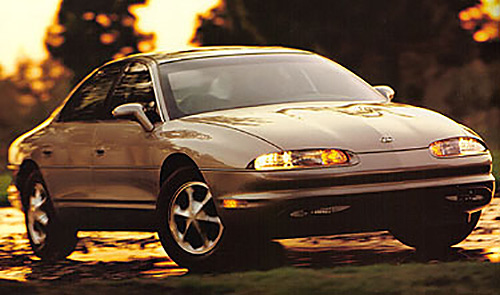 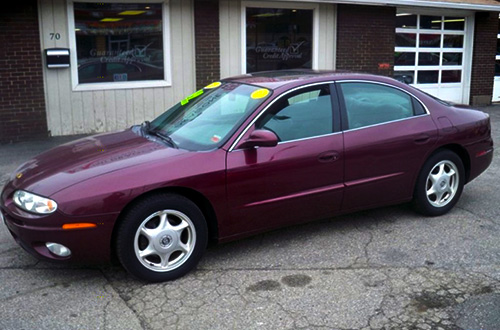 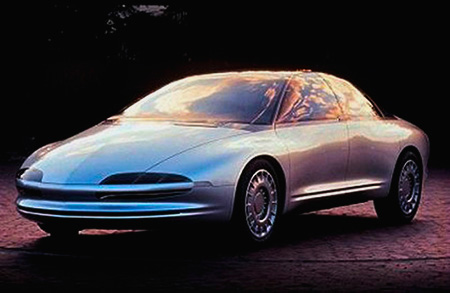