In late 1984, Oldsmobile was finishing development of the Quad 4, a new inline four-cylinder engine that had dual overhead cams and four valves per cylinder. It was innovative for a four-cylinder, Olds touted the engine as the perfect mix of fuel economy and power. In its early 2.3-liter days, the engine was capable of delivering 150 horsepower and 160 pound-feet of torque, eclipsing other domestic four-bangers and rivaling competitors’ V-6 offerings (Honda’s 2.5-liter V-6, was rated at 151 hp in 1986).

Olds’ top officials wanted to show off the Quad 4’s potential. Ted Louckes (Olds chief engineer) quickly formed a group to develop the Aerotech, a research vehicle designed to demonstrate the Quad 4’s performance potential to consumers and engineers alike through setting a world speed record. Ed Welburn, assistant chief designer in the Oldsmobile studio, was primarly tasked with crafting the exterior of the Aerotech.

The following was written in 2008 by 'darkfox' on quad4forums:

The Oldsmobile Aerotech and A.J. Foyt made automotive history on August 27, 1987. On an oval shaped, 7.712-mile test track near the little town of Ft. Stockton, Texas, the four-time Indy 500 winner drove a pair of these futuristic research vehicles, each with a different aerodynamic shape, to new world's records.

This record-setting performance was well covered by the world's sports and motoring press, which would have been reason enough for building the cars. But there were two other important motivations, pride and progress. Putting a couple of American names in the record books gave everybody involved a warm feeling, and pushing the limits of technology yeilded knowledge that will be put to good use in future street-driven Oldsmobiles.

The key objective of the three-year Aerotech project was to explore the outer limits of the Quad 4 engine's performance capacity. There was only one rule: Retain the Quad 4's architecture--its 16-valve, dual overhead cam configuration and in-line, four cylinder bore spacing. Two companies, Feuling Engineering and Batten Engineering, approached the power requirements from different directions under the careful eye of Oldsmobile engineers. The result was a pair of 1000 horsepower engines; one with two intercooled turbochargers, and one with a single intercooled turbo. Both got the job done; the batten single turbo was used in the short-tail Aerotech for the closed course record and the Feuling dual turbo was used in the long-tail Aerotech for the flying mile.

Yes My Brother and I drove those same Aerotechs with the Aurora engines to about 25 land speed records. AJs records were with a super-duper-charged quad4 and he ran it ragged to something like 260mph sideways, I am told. We on the other hand drove the Aerotech at a more placid 180mph ,but we did it for 3 days straight ,day and night, without lifting our right foot off the floor except for refuelings every hour and 45 minutes.

One of the drivers, hit a mule deer at 180 mph and it blew off the driver canopy and it broke his full face helmet and he ended up way out in the desert, with the rattle snakes and a mouth full of deer meat . This is a true story. I gave him such a hard time -- That afterwards, when we picked up our last Achieva, from his race shop, that we were to make into a race car, he had hid one of the deers feet under the driver seat, and the first time we drove it -you know what came popping out. Enjoy your venison!
Paul Hacker

We were not part of Oldsmobile motorsports with AJ- we were after his efforts - the first and second Aerotech's sat there, like caged animals, in Lansing where we would pick up our future race cars and parts. Yes Olds spent hunndreds of thousands on our land speed records to do very little hurrah with what we accomplished. Even the plaques we were given I think were done in vanishing ink as over time the record marks are fading. As we did this, as drivers, we thought the whole thing rather stupid. We were told to slowly get the car to speed ,no power shifting and cruze at 180mph - on the peg as we all called it. It was a easy to drive as 55 is on the interstate - and when we came in we let off 1 mile out and shifted to nuetral and coasted in to save the brakes for the 3 day hunt for records.

We as humans forget the bad times and only remember the funny stories, but for most of the the 3 days it was 20 degrees F and sub zero wind chill in the drivers seat. After only a few minutes in the seat our feet where frozen and we drove that way for 1 3/4hours at a time-pretty stupid- at 180 mph. When I pitted for fuel and went to use the brake to slow down, I had no sensation in my feet to tell if I was depressing the gas or brake pedal. I had used those chemical pocket warmers that the GM guys had bought for us, but all they did was give me third degree burns were I had placed them, I was so cold that I had no sensation that they were burning me. It took years for the scars to go away. What we guys will do to entertain ourselves. BUT The food was excellent - they had some Amish church ladies in the puritain outfits come in and cook for us, - I put on 10 lbs in 3 days.
Paul Hacker

The following was posted in 2003 on the Autosport online bulletin board by 'doc450'. He visited the shop while they were building the cars and had a friend who crewed for AJ Foyt during the 80's. This friend kept him apprised of the Aerotech project, took many pictures, and often called from the test tracks with the latest wild tales from the envelope's edge.

The design and engineering was a multi-million dollar effort by Oldsmobile, but the edge-of-the-envelope driving job was one of the greatest in the history of motorsports for many reasons.

For one thing, rumors abound that due to internal GM politics after the initial shakedown test at GM's Mesa, Arizona proving grounds (216mph first lap out of the transporter with the Indy pole speed being in that range), Chevy pulled rank on Olds and wouldn't allow the record runs to occur at the Mesa track. However, the truth probably lies in the quality of the racing surface and the Fort Stockton track sufficed.

Instead, Olds had to settle for old and extremely treacherous, 7.7 mile, Firestone test track near God forsaken, Fort Stockton, Texas with it's unpredictable prarie land winds, and inadequate safety barriers. Foyt said, "Hell, I told'em if I run off'a that thing, the coyotes would get me before they could even find me!"

During one of the first shakedown runs at the GM track an small fire developed. When it did indeed begin to burn, Foyt was making a run and the cockpit began to fill with oil fire smoke. He radioed in, told them about the fire, and headed toward the garage area which was quite a distance away. Foyt came in like a Hurricane smoking onto an old grass field, and pulled down onto the apron. The canopy could be released from the inside but due to its weight and being hinged at the front, a driver couldn't actually lift it to extract himself. They lifted the body and pulled a small piece of insulation away from the turbo. No big deal. Fire out, source determined and the test continues with little interruption.

Over the radio, the engineers kept telling Foyt to crank the boost to higher and higher levels until they reached 40lbs. Foyt says he gradually twisted the knob, whincing and waiting for an engine failure (however, even under extreme boost both the single turbo, Batten Engineering Quad4 and the Fueling, twin turbo engines were extremely reliable) and the problems it would cause. Can you imagine blowing an engine while stuck on the banking at 270mph?

To capture the flying mile world record, the car had to run in both directions. That in itself posed quite a challenge, but became more of a challenge when everyone realized both runs had to be conducted within one hour! A fuel pickup problem caused a few anxious moments, but they were quickly resolved.

Finally, the little gremlins were fixed and Foyt began the record runs in earnest. His speeds on the straights were clocked at nearly 290mph, not too impressive considering many 300mph club members at Bonneville. However, having to turn and entering the banking proved to be quite the challenge. In fact, Foyt was entering the banking and actually letting the Aerotech slide like a sprinter until it stuck on a line.

While exiting the last turn, the Quad Four sucked at least one of its 16 valves which had a dramatically adverse effect on its power. Nonetheless, Foyt had secured the international, closed course, world speed record averaging 257mph. Since the speed trap was miles down the track from the exit of turn four, no telling how high the record would have been with a healthy engine.

True to form, Foyt wound up the Quad4 engine again, cranked the boost to 40 lbs and, again, without the engine performing at its optimum output set the international, flying mile, world record with a two-way average of 267mph.

Modern Day Influence of the Aerotech

Ed Welburn, currently Vice President of GM Global Design (key designer of the Aerotech) was touring through GM design studios in September 2010. One group he visited was working on a low-drag vehicle design, and had a number of photos posted for inspiration -- one of which was the original Aerotech.

“Aero is very important to me today,” Welburn notes, “and I credit that push and knowledge to being involved with Aerotech. [Many] of the fundamentals I’ve learned directly came from the opportunity to work directly with aerodynamicists.”

Indeed, when it came time to evolve the Chevrolet Volt concept into a production vehicle, Welburn knew aero would be an important factor. A number of the tricks employed in the Aerotech’s design do reappear in the Volt’s finalized form. The front corners have been rounded considerably to cut drag, while the fog lamp recesses have been exchanged in favor of a flush design. The Volt’s sides, especially in front of the rear wheel wells, is remarkably flat; as was the case on Aerotech, this helps direct airflow over - not into - the rear wheels. Underneath the car, the Volt utilizes a set of three panels to direct air, although they’re not designed to generate downforce like those on the Oldsmobile Aerotech.

Video above: Interview with Ed Welburn, Aerotech story starts at about 5 mins 15 seconds.

Video above: An Aerotech Documentary "Record-Breaking" presented by Sam Posey. 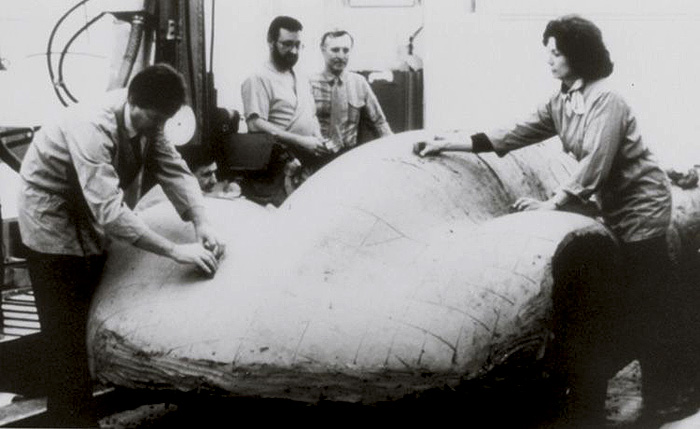 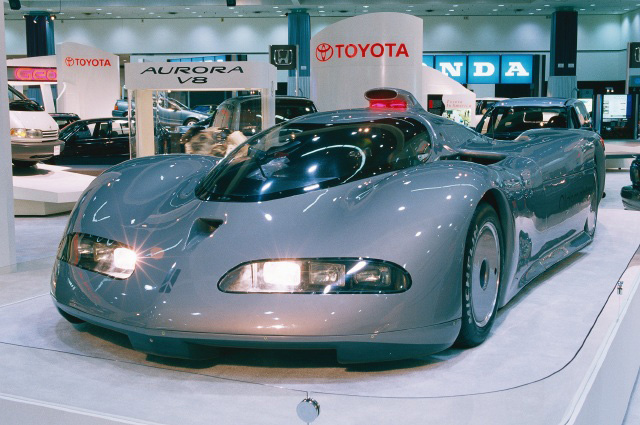 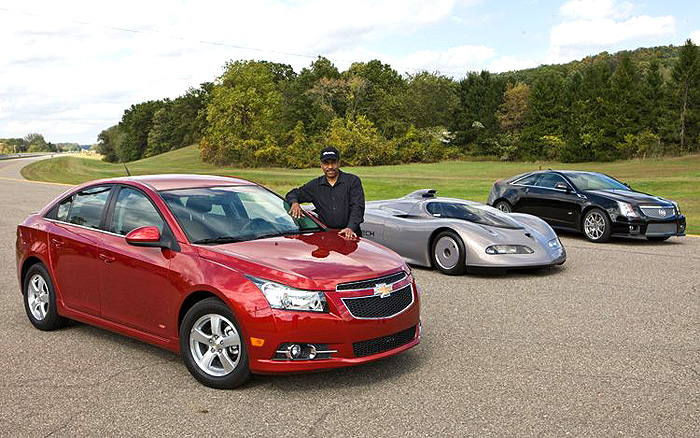