"To infuse sportiness with sophistication"

On this page:
Intrigue Year to Year Changes

Oldsmobile started shipping the Intrigue in May of 1997 (model year 1998), on through 2002. The Intrigue's design cues were first seen in 1995 Oldsmobile Antares concept car.

All Intrigues were built at the GM Fairfax plant in Kansas City, Kansas, where the Grand Prix was also built (Buick Century and Regal, Chevrolet Impala and Monte Carlo were all built in Oshawa, Ontario, Canada).

Oldsmobile bet its future on offering to the American buyer a fleet of "internationally focused" import-antidote vehicles. Intrigue was the all-new midsize sedan in the Olds arsenal. Before Oldsmobile started design for this next gen Cutlass, it had to ask why some buyers favored import brands. According to its consumer research, the most cited factors in favor of the import equation were; subdued-but-unique styling, a noticeably more refined overall character, and higher quality. Import buyers also cited livelier acceleration, crisper handling, sharper steering precision, and a tidier exterior package. With the Intrigue, Oldsmobile tried to incorporate all of these items into an American made car.

It's interesting to note that Oldsmobile almost installed a completely different engine from the 3800 V-6 used in 1998. Oldsmobile had originally intended to use its existing 3.4-L/215-horsepower DOHC V6 in the Intrigue's engine bay.  (1999 saw availability of the V6 3.5L/215-horsepower "Shortstar" which was associated with Cadillac's V8 Northstar family - this 3.5L engine was standard on 1999 GLS, optional on GX and GL)

Although the old 3.4-liter would have easily met the Intrigue program's 200-horsepower target, compared to the import V6s, it was a relatively rough and noisy piece. The 3.4 was derived from the corporation's veteran 2.8-liter OHV V6, which was originally developed for GM's late-'70s X-cars.

During final market research, potential customers driving prototype Intrigues observed that the 3.4L sounded loud and strained at higher rpm. Development stopped. Engine mounts and transaxle bolt patterns were modified. And six months before the first pilot 3400-equipped Intrigues were to go down the assembly line, Olds pulled the plug on the powerplant and swapped in the 195-horse OHV 3800 V6.
Driving and acceleration tests revealed that the 3.8-liter 90-degree V-6 was incredibly fuel-efficient, particularly on the highway. GM claimed the powerplant also set internal standards for low emissions, low weight, and compact size. Motortrend reported a 0-60 time of 7.7 seconds with the 1998 Intrigue.

For 1999, full-function traction control and Magnasteer variable-effort power steering also came part-and-parcel with the new 3.5L “Shortstar” engine. The full-function traction control operated at any speed to reduce wheel spin when accelerating on slippery surfaces, and it could be de-activated via a button on the console. GM’s Magnasteer power steering provided varying levels of power assist depending on vehicle speed.

Despite many endorsements, Intrigue sales tapered off quickly, going from nearly 108,000 for extra long model-year '98 to just under 94,000 in 1999, then to about 80,500 for 2000. But this wasn't the Intrigue's fault. Other factors were at work unfortunately, related to the announcement of the end of Oldsmobile in September of 2001.

1999 Oldsmobile Intrigue:
For the beginning of this model year, the DOHC 3.5 L "Shortstar" engine was standard in the top-line GLS and optional on mid-level GL and base GX models. Early GLS models could be ordered with the 3.8L instead of the standard (for GLS) 3.5 L, but later on the 3.8 L was phased out and the 3.5 L became standard on all models. Decklids now wore a small Oldsmobile badge. In the previous model year, there was a complaint that some people couldn't tell that Intrigues were Oldsmobiles. If you look closely, you can read 'Oldsmobile' molded in the backup light lens in the taillight housing on all model years. All models now got a thicker, leather-wrapped steering wheel. New to the option list was GM's OnStar emergency/communications system. Integrated rear window grid-type radio antenna was standard this year and after.

2000 Oldsmobile Intrigue:
New wheels featured a fancier six-spoke design. New to the option list for 2000 was an antiskid system called the Precision Control System. Precision Control System was designed to help keep the car on its intended path by selective braking of one or more individual wheels. Though optional on all models, GX buyers had to order optional traction control to get the new antiskid system. Heated power front seats were now standard on GLS models. Standard leather door inserts trim not cloth. Retained accessory power was standard this year. "Oldsmobile" emblem on deck lid is larger than on 1999 models, although some early 2000 models carried the smaller version. A new gold-trim package was also available. New automatic headlights were now standard on all models. 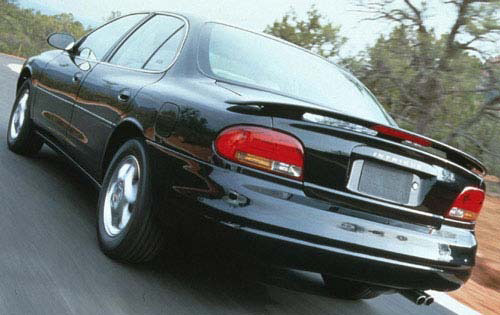