On this page:
Bravada Year to Year Changes

Essentially a Chevrolet S10-Blazer wearing a tuxedo, Bravada came equipped with GM's full-time 4WD system, known as "Smart Trak." However, the Bravada was not being touted as an off-road vehicle, so no off-road suspension package was offered. Under the hood sat a 160-horsepower 4.3-liter V6, paired with a 4-speed overdrive automatic transmission. Four-wheel antilock brakes were standard, as were leather upholstery and a host of power accessories.

In 1996, after a year off, Olds rejoined the sport-utility race with an updated Bravada. The 1996 Bravada shared its basic design and 190-horsepower, 4.3-liter V6 engine with Chevrolet and GMC.

The hiatus was caused by softer-than-expected sales, coupled with the fact that the division's top brass were working on a deal that would've seen a revised/rebadged Isuzu Trooper serve as donor platform for a successor vehicle. When that program fell through, Olds opted to base its Gen II Bravada on the new and vastly improved Blazer/Jimmy platform introduced for '95.

In 2002, Oldsmobile's version of the redesigned General Motors midsize SUVs shared a new body-on-frame platform with the 2002 Chevrolet TrailBlazer and GMC Envoy.
Only the windshield, front doors, roof, rear liftgate, headliner, close out panels, rear panel trim and carpet crossed vehicle lines. The 2002 Bravada had its own styling inside and out and rode on a 6-inch longer wheelbase than before, with a body longer, wider, and taller by five inches.

GM's other new SUVs did not have independent rear suspension, though Bravada used rear air suspension in place of coil springs.
For the first time, Oldsmobile became the lead dog with a new GM platform, instead of taking the leftovers and rebadging them.
With an inherently smooth inline six-cylinder developing comparable horsepower and torque of a V8, Bravada owners were able to pull the family travel trailer while getting decent fuel economy.

The last 500 Bravadas were produced as "Final 500" special editions, each featuring custom seat embroidering and exterior badging inspired by vintage Oldsmobile logos, dark cherry metallic paint, unique chrome alloy wheels, and a medallion featuring that particular Bravada's production number, ranging from 1 to 500.
The last Bravada, the number 500, rolled off the assembly line in January 2004. The closing of the last factory that manufactured the trucks was the subject of a 2009 HBO documentary - “The Last Truck: Closing of a G.M. Plant”.

1991 Oldsmobile Bravada:
Bravada was launched with a 160-horsepower 4.3-liter V6, paired with a 4-speed overdrive automatic transmission. Four-wheel antilock brakes were standard, as were leather upholstery and a host of power accessories.

1992 Oldsmobile Bravada:
Added for 1992 is a new High Performance 4.3-liter V6 that delivers 200 horsepower. Also, the standard "hockey stick" speedometer carried over from the Chevy Blazer is replaced with a more subtle unit with a regular needle and a 180-degree sweep.

1994 Oldsmobile Bravada:
A 1994 Special Edition Bravada includes gold exterior trim and all-season tires. Other changes to the Bravada include the addition of new guard beams inside all four doors and a new center high-mount stoplight.

1996 Oldsmobile Bravada:
The second gen Bravada was reintroduced with a 190-horsepower, 4.3-liter V6 engine. An electronically controlled 4-speed automatic was the only transmission offered, with a console-mounted gearshift lever. Exterior trim was unique to Oldsmobile, and Bravadas came with standard leather upholstery and wood interior accents.

1997 Oldsmobile Bravada:
Few changes were noticeable in the 1997 Bravada, apart from a new one-piece liftgate to replace the original two-piece tailgate. Four-wheel disc brakes now were standard, and a power sunroof joined the option list.

1998 Oldsmobile Bravada:
Bravada gets a fresh look for '98 with new headlights, bumpers, and grille. Also, a redesigned instrument panel adds a passenger-side airbag and new radio.

1999 Oldsmobile Bravada:
For 1999, steering wheel controls for the audio and climate systems were a new option, as was the pewter-colored Platinum Edition. It included a number of driver-convenience features and bodyside cladding.

2004 Oldsmobile Bravada:
In this model's final season, 500 specially-trimmed Bravadas went on sale. Dubbed Collector Editions, these SUVs featured special embroidery, wheels, and badging. After a century of life, the Oldsmobile brand faded away early in 2004, but Buick now offered a version of the GM midsize sport-utility vehicle called the Rainier. 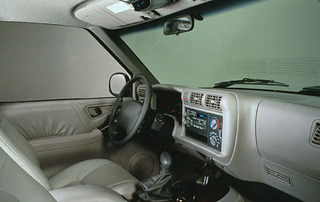 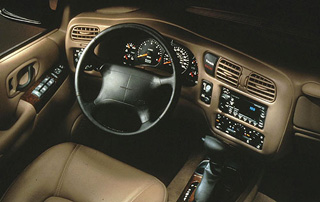